Expanders are items used to modify tools to increase their affected area, either horizontally or vertically.

Expanders can only be obtained from crafting

See Height++ and Width++ for information on their modifiers.

Expanders can only be used to modify tools, specifically those intended for breaking blocks. 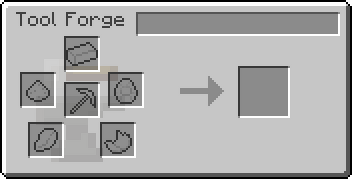 Expanders will irreversibly increase the area a tool will break, so commonly they are used on tools with one or few applications, such as Hammers or Excavators used for terraforming large portions of land or Scyths used solely for leaves and grass.

For such tools, it is common to use cheap materials for a head to avoid wasting rarer items. For a terraforming Hammer, a single stone large plate will allow for it to be repaired with stone. Although decreasing the tool's durability, as the Hammer will be breaking massive amounts of the stuff, it is worth it in the end. Adding to that, an Ardite large tool rod will add Petramor, repairing the tool occasionally when breaking stone. A Cobalt hammer head or large plate will provide momentum to increase mining speed as you mine without stopping. Blasting is a common Modifier to add as it will void some blocks broken and allow for dirt and other blocks to be broken that couldn't normally be broken by the hammer. With this, a Knightslime hammer head or large plate will add crumbling, making such blocks even faster to mine. And if you have the PlusTinc mod, Alumite will let you forget about the blocks broken entirely by teleporting them into an inventory somewhere with Global Traveler.

If you wish to use the tool for mining and don't have room for autosmelt or luck, try sharpening it with a low level material like Blue Slime Crystal or Green Slime Crystal, making it unable to mine anything above coal. This will let you mine the ores you want with your main pickaxe while keeping the large mining area of your tool from being a problem.