Pig Iron is an alloy which can be made using Liquid Iron, Blood, and Molten Clay. 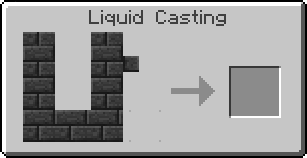 Whenever the tool is used to damage a mob or to mine a block, regardless of if that was the tool's intended use, there is a chance for bacon to appear in the player's inventory

When held, if the player is not at full hunger, the tool will sacrifice a small amount of durability (different amounts for each tool), make the sound of the player eating a porkchop, and restore 0.5 hunger points.