Slime Ball is a base crafting item as well as a food.

Slime Balls will sometimes drop from Blue Slimes upon killing them. These chances can be increased with Luck or Looting.

Slime Balls have a small chance from dropping from the Slimy Leaves of a Blue Slime Tree.

Description: Using one color of slime will produce that slime color of boots. Mixing slime colors will result in making the green version.

In addition to the above recipes, Slime Balls can also be used in any recipes that require Slimeballs and support oredict. 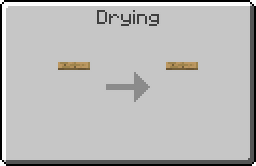 Slime Balls can be eaten to provide 0.5 bars of hunger and 1 saturation. Doing so will also give you the effects of Slowness III (0:45) and Jump Boost (1:00).

Issues relating to "Slime Ball (Blue)" are maintained on the issue tracker. Report issues there.