Slime Boots are boots that negate fall damage and bounce the user off the ground.

Description: Using one color of slime will produce that slime color of boots. Mixing slime colors will result in making the purple version.

As an armor piece worn the boots slot, falling from a block height of more than 2 will cause the user to bounce back up at about half the height of the amount dropped. The user will then continually drop down to the ground and bounce back up to a lower height until the block height is only 2. Due to this ability, Slimeslings are intended to be used with it for fast travel.

Issues relating to "Slime Boots" are maintained on the issue tracker. Report issues there.

All colors of Slime Boots. 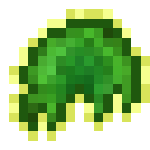